As if things just couldn't get better for us extreme pear lovers, MercedesBBW has just released a vid featuring none other than UniquelyMadeDiva!!!

SO, peeps, bung a few dollars to your favourite model, buy a vid, or simply spread the word that we love these women and appreciate them sharing their amazing voluptuous bodies with us.
We just wont realise what we've had till it's gone...

Oh, and check out this sample pic and vid of UniquelyMadeDiva's vid... OMG!!!!
If she doesn't make ya wanna buy a DVD, nothing will!! 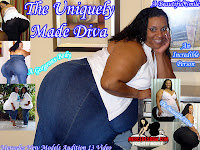 all i got to say is she wont find a woman with a 100+inch booty.

Course she will! In fact, I bet her next big find will have 100" booty. I know that at least two of her models never got measured, and Mercedes just threw some numbers on there.

Hell, in fact if you listen to that 5 min vid that Jonas posted where Uniquemadediva is hanging out with her girlfriends, she distinctly says she has "85 inches"

So yeah, she'll find one soon enough. In fact, I think she held off of saying uniquelymade has 100" because she is waiting (or already has a person in the wings) of about the same size, but willing to get naked.

Anonymous said...
This comment has been removed by a blog administrator.
1:06 AM

You do realize that like 80% of the reason mercedes does have a site is to promote her DVDs right? As a site, it pretty much does suck, but then, that's not where the majority of her effort goes to. The DVDs are where it's at

This was my highest wish, and it's been granted !

Anonymous said...
This comment has been removed by a blog administrator.
9:38 PM

Mercedes is known to find the biggest curviest women on the net, but I think she out done herself with U-M-D. She may find a woman with a 100" ass but I seriously doubt that she will have the type of curves that U-M-D has. Ms. Assolot is suppose to have a 98" ass and I thought she was curvy but she has nothing on U-M-D. I don't think I've ever seen hips & ass that amazing!!

she has
but honeybunz is wow too
imagine them 2 together

Since you're imagining..what about having those two in bed together? Talking about needing to eat your wheaties!!

that would be heaven. i wouldnt leave the house like boo radley from to kill a mockingbird.

can anyone tell me the url to UMD myspace page?...thanks

I just got the video! I can tell you guys that SHE'S HOT! - The video is not. You get to see her pose but, you don't hear her because there's music over the entire video. That takes away from the video production. There's also not enough of her just walking around, in more natural settings. She's posing for the camera but it's not nearly as exciting as it could be.

Thanks for letting us know about the video. I was debating on getting it.I think i'll just wait to catch some of the video clip on youtube,rude.com,or dailymotion.com
I've been burned several times buying poor quality vids from mercedesbbw.com But in all fairness I have got A few good ones also.

Been burned by the poor quality too, some of the vids for purchase are also poor quality. it's a shame.